Canada Stampings LTD, Woodstock, Ontario, a Tier II supplier to the automotive and aerospace industries as well as to the medical market the company has a rich heritage in the Canadian stamping industry. With its continued growth, the company, founded in 1898, has changed locations several times and upgraded equipment to meet market demands and opportunities.

In 1997, company president Dave Hewitt purchased the company; in 2006 he built a new facility to handle all operations. Focused on continuous improvement and on developing quality-assurance programs, all operators are fully trained in statistical-process-control methods to ensure products are shipped on time and to specifications.

“Before moving equipment into the new building,” says Hewitt, “we analyzed all aspects of the operation with the major objectives being to increase efficiencies, reduce changeover times, improve plant cleanliness and install state-of-the-art equipment wherever possible. We achieved all of those objectives, but one major improvement that needed additional attention was managing the scrap coming off our presses.

“Prior to construction of the new facility, all scrap handling was done using the combination of press operators, hand trucks, forklifts and dumpsters,” Hewitt continues. “In addition, when you start moving scrap around a plant, things get dirty quickly.”

Activity Under the Floor

“We wanted a system that would allow us to drop scrap under the floor to conveyors and take it out of the building,” Hewitt says, “which would help to keep the plant clean. We also wanted a system that was as maintenance-free as possible and that would take the worry out of potential jam-ups. About 10 years ago, we installed our first three press-mounted shuffle conveyors, giving us a lot of experience with the technology and helping us to make the right decision for the new scrap-handling system.”

Another objective of the plant’s management team was the ability to keep carbon-steel scrap separate from stainless-steel scrap, since mixing the two meant receiving a lower price for the scrap. And, because carbon and stainless comprise the bulk of the materials the company stamps, it needs to be able to convey them both at the same time. “We also needed flexibility at the presses when running nonferrous materials,” Hewitt adds, “which we could not mix with the two primary steels. After doing due diligence, we determined that the shuffle conveyor system was the solution we needed.”

The shuffle conveyors under the plant floor run the entire length of the stamping operations. When the scrap reaches the end of the shuffle conveyor, it dumps into a 42-in. dual-lane steel-belt conveyor (also from Mayfran), which elevates it up three stories. On top, each lane drops the scrap into standard steel hinge-belt conveyors, which drop the scrap into diverter chutes that feed into the proper roll-off bins. The roll-off bins sit on scales, which the Mayfran system monitors so when the bins reach the required load level, a swivel chute switches to the empty bin alongside the full unit. This optimizes efficiency for the truck companies that haul the scrap a.

The shuffle conveyor employs extremely simple technology. An electric motor moves a driveshaft on an output hub through a reciprocating motion. As the driveshaft accelerates, the scrap on the conveyor tray pushes forward several inches, where it remains while the shaft returns to its original position, and then the cycle begins again. Thus, scrap shuffles its to its destination quickly and quietly.

“We’ve yet to experience a single jam-up in the shuffle conveyors,” says Hewitt, who also notes how reliable the conveyor’s drives have proven to be. The motor and shuffle drives are direct drive—no belts or chains to break or maintain, and few of the wear-prone pinch points that characterize many conventional conveyor designs. Also, because the unit is non-vibratory, there is no risk of damaging the floor anchor system or the drive itself. In addition to having few moving parts, virtually all of the parts used in constructing the system are rated in excess of how the unit will actually perform.

Hewitt adds, “I would never go back to any other of handling scrap in the plant. We’ve been able to eliminate one forklift and rededicate two employees to other more productive duties. Maintenance on the system is near zero and the plant is a lot cleaner. Maintenance costs have been reduced and our increased efficiencies have resulted in increased press uptime.” MF 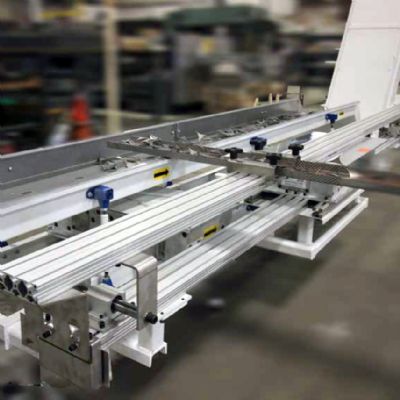