What served as a canopy-style roof at the Miller Outdoor Theater in Houston, TX, needed repairs in short order. Tasked with that job, Byrne Metals installed more than 18,000 sq. ft. of copper 238T standing-seam panels during the theater’s 5-month offseason, thanks in part to a rollformer from McElroy Metal, Bossier City, LA, that ran panels right onto the roof deck.

This 2013-14 multi-million-dollar renovation served to correct canopy deficiencies that caused leaks above the stage as well as the audience, putting a damper on the theater’s cultural and educational offerings. And for more than 40 years, due to heavy Texas rains, anyone hired to permanently repair the roof of the iconic structure had failed. 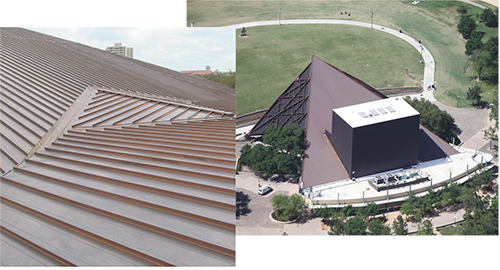 “Everyone else who had tried to fix the roof-leak problems focused on trying not to change the appearance,” says Karl Schaack, president of Price Consulting, Houston. “We realized that providing a leak-free solution required some change in the appearance. We got a little pushback at first, but when we explained our design, they were just happy to know it wasn’t going to leak anymore.”

Schaack chose the 238T symmetrical panels from McElroy Metal for this project.

“It’s rigid and it meets high-wind requirements,” he says. “The 238T is symmetrical so that if a panel gets damaged, you only have to replace one panel.”

Byrne Metals went to work as soon as the 2013 season concluded in early November.

Improvements included replacements of the east and west wings, a new soffit for the main sloped roof and the new 20-oz. copper standing-seam roof. The profile was McElroy Metal’s 238T panel.

“Using copper helped the new roof blend in with the original framework,” Schaack says. “Especially as it ages, it will look great, like it’s been there all along.”

McElroy Metal’s jobsite production equipment simplified the process of installation and made the jobsite safer. The rollformer was hoisted to the eaves on a scissor lift where panels were conveniently run onto the roof then cut to fit. This method not only eliminated the need for an expensive crane to lift panels to the roof, but was deemed safer as some of the panels measured to 110 ft. long.

“We specialize in the unique and difficult,” Byrne says. “This is the kind of job we like. We generally have about 20 to 30 projects under contract at any one time, but this one required a lot of personal attention from our upper management, myself included. We had as many as 30 crewmembers onsite, working 10-hour days and some weekends, when necessary.”