Diemasters Manufacturing, Inc., Elk Grove Village, IL, is all about embracing change to ensure steady growth. Since receiving the Metalforming Pioneer Award in 2011, the custom stamping, fabrication and automated-assembly company has gone through a restructuring and changed its sales direction, while continuing to shine a light on employee training and productivity.

“When it became apparent that the growth potential of Diemasters was beyond our current capital structure, we approached a long-time affiliate and in 2015 became a part of the Weiss-Aug Group,” says President Virgil DeLay. The Weiss-Aug Group is comprised of Weiss-Aug (custom insert injection molding, precision metal stamping and assembly) Weiss-Aug Surgical (medical-device components and subassemblies), JK Tool (production machines and tooling) and Diemasters, where the emphasis is on value-added assemblies comprised of stamped and fabricated parts.

“By becoming a part of the Weiss-Aug Group, we were able to shift our precision-contract work to Weiss-Aug, which gives us the opportunity to focus on our value-added business, utilizing our productivity and training systems to ensure success,” explains DeLay. “While our sales direction has changed, with some stamped parts now being tooled and produced at Weiss-Aug, our overall sales continue to grow.

“Revenue for 2017 will be up 9.5 percent over 2016 figures, even after some significant program obsolesces,” he continues. “Moreover, while our direct labor has actually increased by 1.6 percent due to the higher value-added content of our product mix, the cost savings from our workforce-development and productivity endeavors have resulted in an approximate 5-percent reduction in indirect-labor and manufacturing-overhead costs. Meanwhile inventory and receivables remain constant.”

Another constant at Diemasters is its commitment to employee training, as seen in The Diemasters Productivity System (TDPS) and its centerpiece—the LISSTs training series, named for its five components: lean manufacturing, inherent simplicity and Theory of Constraints, safety first, Six Sigma and TS 16969. “The success of TDPS has enabled us to pass our recent IATF quality audit (the new TS 16949 automotive quality-assurance standard) on the first try,” says DeLay. “This puts us in an elite category with our top customers as their first IATF stamper.”

DeLay continues: “We now have three Six Sigma black belts and two green belts. This emphasis on Six Sigma is important because it reduces variation and increases throughput in our process, and produces a more efficient, less costly part for our customers. Lean also remains an important part of our culture, and is constantly reinforced through our LISSTs training program.”MF 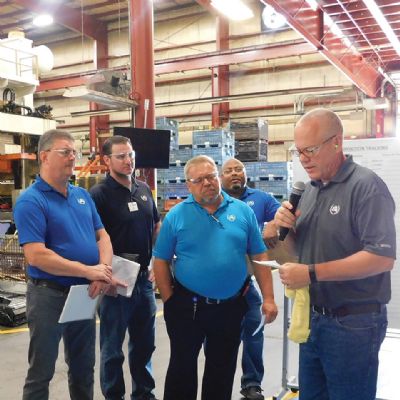 
2018 Awards of Excellence in Metalforming