As stamping presses continue evolving, so, too, do systems charged with controlling them. From major drive controls to products easing operator tasks, we present an overview of what’s out there. This article supplies links to recent MetalForming articles describing other introductions, including the SmartPac Pro press automation controller from Wintriss Controls, the DSF-series servo press control from Aida America, and the RMC75E two-axis controller from Delta Computer Systems. 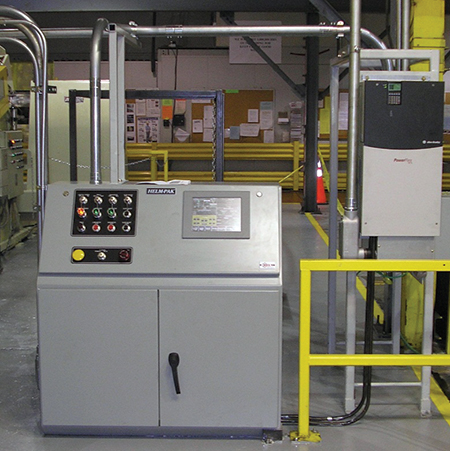 Drive and Control Technology, Plus Line Integration for Servomechanical Presses

In addition to liquid-cooled drives and unique energy-management systems, Siemens also provides the FX2s with technology that helps power Nidec Minster’s control. As a result, the series features user-friendly programmable motion profiles for manufacturing flexibility as well as a multitude of profile shapes. All motion profiles afford users full torque and energy at lower speeds. 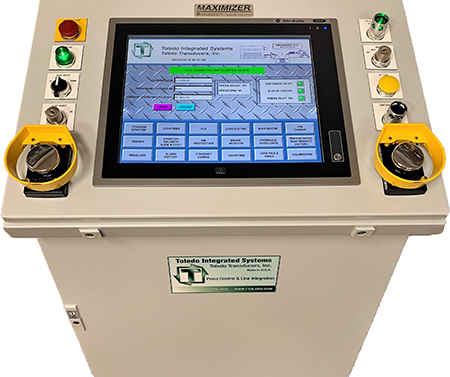 Toledo Integrated Systems, having increased the capabilities of its Maximizer product line for the past two decades, now offers the Maximizer TLC (Total Line Control) with controls not only for the press but also for the entire feed line. Instead of interlocking two separate pieces of equipment together, the TLC uses a single control for the entire press line, easing line operation and troubleshooting. With this setup, note company officials, users only have one set of electrical drawings, one control processor and one operator screen, from a single provider. 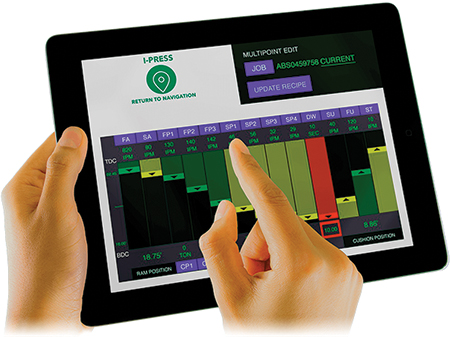 With the I-Press AB Hydro control, and starting and ending at top-dead center (TDC), the servo drive allows for as many as three rapid and four slow pressing speeds, a capability that increases the efficiency of complex forming operations and reduces secondary operations. Unlike servo-driven mechanical presses, according to company officials, a servohydraulic press with I-Press can deliver as much as 100 percent of press tonnage at any point in the stroke, with users given the ability to program dwell time at the bottom of the stroke prior to decompression and upstroke return to TDC.

The I-Press multipoint job-setup screen features a slider-bar function—users can drag it to a setpoint, or tap to enter numeric values for all approach, dwell and return motions. With the I-Press AB Hydro control, along with servo-driven pumps and the multipoint edit screen, users can optimize motion, pressure and position curves to optimize part output and die life. Remotely monitor and troubleshoot by connecting the control to mobile devices.

Installation is simple, with industry-standard 30.5-mm-hole mounting and pluggable terminals to simplify wiring. Indicators provide for simple troubleshooting and output status, and solid-state terminals eliminate the need to replace buttons due to worn relays.

The combination of Stamtec’s servomechanical-press offerings and controls enables virtually an unlimited number of stroke and slide-movement profiles, while supplying full working energy even at slow speeds/dwells. Controls specifically designed for servomechanical presses feature user-friendly interfaces, and given the stroke and slide-movement flexibility, enable users to perform a variety of jobs—drawing, restrike, warm forming, etc.—in one press. Stamtec can custom-supply unique profiles, while customized motion curves allow as many as 20 various segments in a cycle curve, defined by segment position, speed and pause-duration parameters.

Recent issues of MetalForming detail a host of developments in press-control technology, some of which we recap here.

Aida-America, Dayton, OH, released the next generation of its exclusive Allen-Bradley-based DSF-series servo press control for machines with capacities from 315 to 3500 tons. The control utilizes an Allen-Bradley Compact Logix programmable logic controller for press operations, diagnostics and safety on a 19-in. Allen-Bradley PC touchscreen. Features include direct access to a pdf of the press manual and infinitely programmable stroke and velocity profiles, reportedly allowing for higher productivity than mechanical presses and improved precision as compared to hydraulic presses. See Tech Update in the October 2018 issue of MetalForming for more.

See the FABTECH 2018 Delivers feature article in the February 2019 issue of MetalForming for more.

A company producing aerospace parts upgraded a 100-ton hydraulic press with a new control system to fix repeatability and vibration problems. A PLC had been controlling the motion of the press, originally designed primarily for stamping, and the PLC could not precisely control the velocities of the two opposing cylinders. Its insufficient scan rate could not accurately track changes in transducer inputs, and the hydraulic valves lagged in their response to control inputs.

To address these issues, the fabricator installed new valves and transducers, and replaced the PLC-based motion controls with a new two-axis electrohydraulic controller, all under the direction of engineering consultant Len Hathaway, of Marine & Industrial Repair Inc., Kent, WA. Hathaway knew that the company needed a controller with millisecond loop times and special capabilities for precise velocity and force control, as well as multiaxis synchronization. The solution he brought forward: the Delta RMC75E two-axis controller from Delta Computer Systems, Battle Ground, WA.


Form, Fit and Function, and the Modern-Day Appliance Manufac...


Technology and Innovation are Fueling the Growth of Manufact...