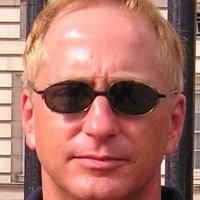 
New Life for an Old Saw


The effect of machine-component obsolescence can be significant, even if the component itself still functions correctly. Consider, for example, a case where a manufacturer/supplier lacks support documentation, or perhaps its staff at the factory is not available to help. In these cases, it can take a long time to resolve a problem, one that may not have been difficult to deal with when the component was new.

A recent case in point: a large 30-in. cold saw used to fabricate high-pressure gas cylinders at Catalina Cylinders Inc., Garden Grove, CA. The billet saw processes 20-ft. lengths of Type 6061 aluminum stock, in diameters as large as 10 in. Feeding and advancing the stock into the saw, which cuts the billets into 4- to 16-in.-long pieces, rests on the back of an aging feed mechanism that had been relying on an old servo-valve controller—obsolete for many years, according to Brian Marion, a mechanical engineer at Catalina Cylinders. While the mechanism had run without major issues of its own, at times operators would need to adjust it directly.

“If the operator made a mistake, it was a nightmare to troubleshoot,” Marion says, “and get the saw back up and running.”

“When you’re fighting downtime, support is a big deal,” says Marion. “We had some issues with connecting to a linear transducer, and Delta’s support crew went above and beyond in helping us resolve the issue.”

Adds Eschborn, “Delta's help screens are among the best I’ve used. Most of the motion-system development that I do tends to be with electric servos. In that world, auto tuning usually only gets you part of the way there, and then the technicians must fine-tune the system to achieve good, precise motion. However, at Catalina we used Delta’s Tuning Wizard and with only one auto-tune operation were able to position the clamp with a high degree of precision.”

The Tuning Wizard automatically builds a mathematical model of the system being controlled, and allows the user to select via an on-screen slider bar the level of responsiveness needed in the control loop.

“We just had to move the slider and push the button on the screen,” says Marion. “We’re holding a tolerance on that old saw of ±0.001 to 0.003 in., and all we changed was the controller.”

By repeatably cutting billets to such tight tolerances, Catalina Cylinder has been able to eliminate a potential source of wasted aluminum. Other savings come from a reduction in downtime for maintenance.

The motion controller gets its instructions from a PLC, which in turn is set up by an HMI screen developed by Catalina Cylinders.

“Before the upgrade,” says Marion, “programming the machine with the old controller was a chore. Now, the HMI enables setup in less than one minute.”

To verify precise tuning of the anvil-clamp control loop, Catalina Cylinder employs the Delta Computer Plot Manager program, provided as part of its RMCTools motion-control software package. “Target and actual motion profiles are plotted,” explains Marion, “and when the actual value of a parameter precisely overlays the target value at all points in time, we know that we’ve properly tuned the system.” 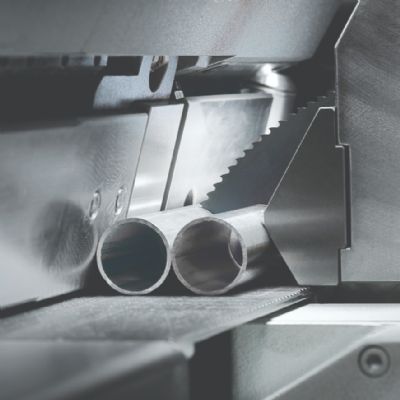 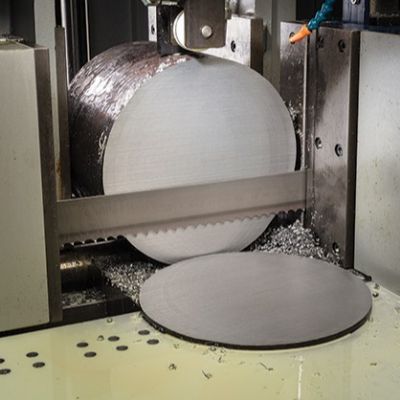