Sixty-eight percent of typical manufacturing costs are in materials and labor. That allows plenty of opportunity to recover lost earnings in the sheet metal-processing segment of your business by focusing on realizing labor and material savings.

So go the findings of the typical audit of CNC punching departments within the walls of sheet metal fabricators, as performed by tooling manufacturer Mate Precision Technologies. As described to MetalForming by Mate regional sales manager Peter Visser, even the best shops with highly skilled labor and well-maintained equipment can improve productivity, gain capacity and fortify the bottom line by implementing best practices related to how they handle their tooling. 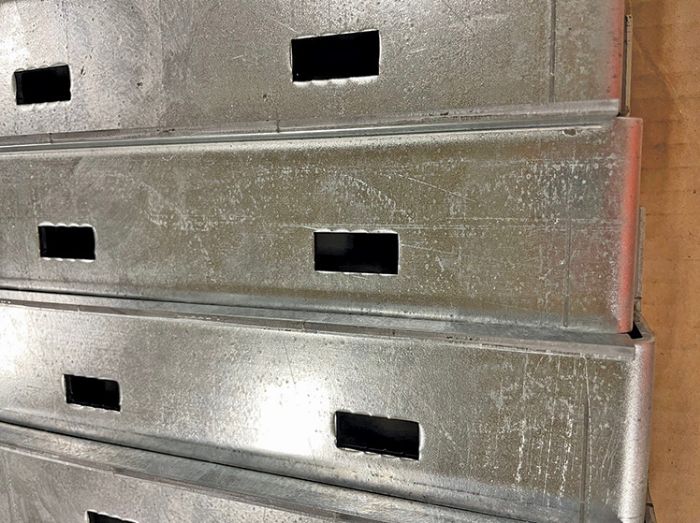 “Consider one recent example,” says Visser, “where we estimated excessive, wasted setup time of 2.5 hr./machine, per shift, every working day. With a loaded labor rate of $50/hr. in the punching department, that adds up to $260,820 worth of lost productivity annually.”

Focusing, then, on how a shop handles its punching tooling and subsequent machine setups between jobs, Visser sees tremendous cost-savings opportunities for fabricators that follow tool-handling best practices. Among them:

“As fabricators look for ways to improve manufacturing efficiency, some opportunities are more obvious than others,” explains Visser. “One of the most inefficient, frequently overlooked techniques is nibbling large holes with a small punch. Generally, parts smaller than 3.5-in. diagonal or diameter should be punched out in a single hit.” 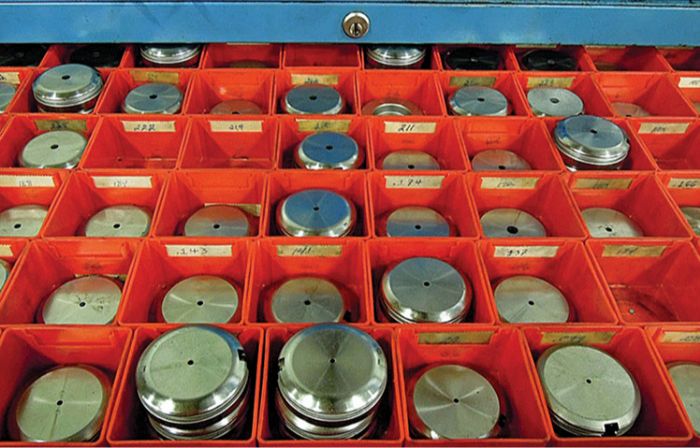 While nibbling works, this process causes problems that negatively affect the machine and the workpiece, including:

“This last problem—post-punch rework—unfortunately is a common practice in fabrication shops,” Visser says, “but it doesn’t have to be. Fabricators can avoid this rework with a simple change in the punching process and a minor investment in tooling.”

When it comes to punching part contours, “avoid nibbling at all costs,” Visser advises, while preaching what he calls the 80-percent rule of punching. That is, rather than nibbling contours, use a punching tool that, with each punching stroke, allows at least 80 percent of the punch face to seat over the workpiece.

“Any less than 80 percent will unevenly load the punch and lead to premature tool wear, burrs and shavings,” Visser says, “and you may start to pull slugs. During nibbling, you’ll seat 100 percent of the tool face on the first hit, then perform a series of punches where perhaps only 10 or 20 percent of the punch might seat on the material—not a best practice.”

Tools used for nibbling generally last about 5000 hits, Visser says, meaning that the tool may require maintenance every 3.125 days (based on 200 hits/ min.). “The proper tool could last at least 10 times longer,” he says. “Every time you replace a tool the machine is down for at least 5 min.—lost productivity. 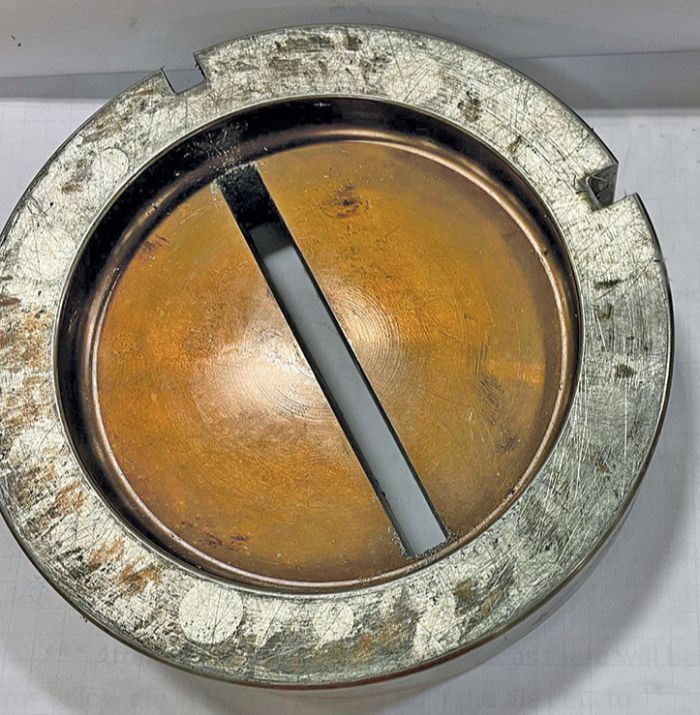 “When touring sheet metal fabrication shops, I’ll often look into the scrap bins and find evidence of hits made where less than 80 percent of the tool face contacted the workpiece,” Visser continues. “Your managers should do the same, looking for shavings and pulled slugs, and go back and ask the programmer to develop new punching routines to follow the 80-percent rule.”

Visser, in fact, recommends that shops place two scrap bins near their machines—one for planned scrap such as setup sheets and initial scrapped parts at the beginning of a run, and one for unplanned scrap such as slugs and parts with excessive burrs, “so that they can track the amount of scrap that could or should have been avoided.”

…often comes down to avoiding dull tools, and a great way to do that: Start each shift by punching a sample template with every tool in the turret.
“Many shops use a standardized turret, both a good and bad practice,” Visser says. “On one hand, it can mean less time spent changing tools and, therefore, increased machine run time. On the other hand, it may mean that the shop never removes the tools to inspect them, until something bad happens.”

The best shops, says Visser, start each shift by clamping a test piece of sheet metal into the punch press of the same type and thickness that they’ll be fabricating, and make one punch with each tool in the turret. They then inspect every hole in that template and feel for burrs, and look for any other indication of dull tools.

“Some of my best customers run two or three of these tests per day,” Visser says. “You also can use these templates as a way to train new operators, so that they learn what good punches should feel and look like.”

When it comes to sharpening their tools, many fabricators don’t have grinding equipment on hand, so they either run the tools until they don’t work and throw them away, or send them out for sharpening. “All you really need is a good grinder or sharpening machine,” Visser says.

There are three telltale signs that a punch has become dull, Visser says:

Because skill level is relatively low for many of these companies, few people understand how to properly maintain tools, Visser says, to get the true maximum life from the tools.

“Any given punch tool can have as much as a ½-in. grind life,” he explains, “meaning that you can sharpen these tools as many as 500 times. Even at 250 working days in a year, the tools should last 2 years. If you sharpen your tools every week, you’ll might get six years out of the tools. Bottom line: sharpen lightly and sharpen often.”

To protect tooling investments, shops should safely store their tools in cabinets or on shelves with protectors/dividers—seems like common sense, but few do this well, according to Visser.

“We see this problem everywhere,” he says. “Storage and organization are my top concerns; we see uncared-for tools all the time. While most machinists take good care of their calipers and other tools that they personally own, they seemingly don’t care as much about the punching tools that belong to their employer. Make sure that your operators know how expensive the tools really are, and the potential impact that damaged tools can have on production schedules and customer relationships.

“If a tool costs $500 and the press has 36 tool stations, do the math,” Visser adds. “Over the life of the machine you may spend more on tooling than on the machine itself.”

In addition to creating scrap, dull tools can wreak havoc on the punching machine.

“When a tool becomes dull it may not exit cleanly out of the sheet,” says Visser. “Instead, it may remain in the sheet for a split second while the machine continues moving the sheet in the X-Y directions, essentially tearing the tool from the machine. This causes machine misalignment. A lot of operators just keep running when this happens. While initially the misalignment may not be too bad, every crash makes it worse. Therefore, shops should check machine alignment periodically. An easy way to do this: Punch a new slug and check to see if the burr is nice and even. Or, punch four holes in the corner of two sheets, then stack the sheets and make sure that the holes align.”

Visser has this piece of advice when it does come time to sharpen the tools: “Remember to replace the chamfer on the edge; a Scotch Brite wheel works well for this. Otherwise, the tool will scratch the underside of the sheets, potentially turning the entire sheet into scrap. I see this a lot. And, when you scratch the sheet, those shavings may wind up under the dies and in the tooling. This can cause damage to the die holder so that the die won’t sit flat, another cause of premature tool wear that easily can double consumable costs and increase machine downtime.” MF 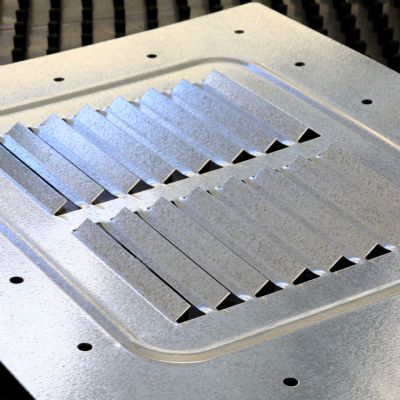 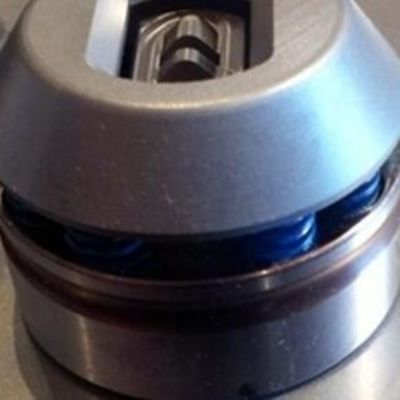 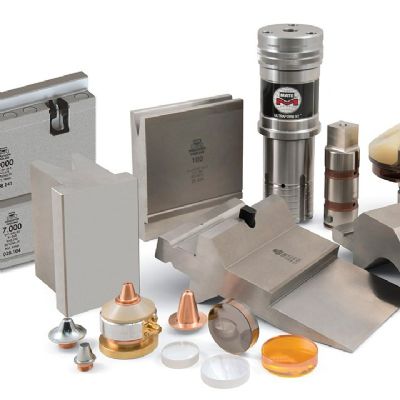