On and off during the past 20 yr., I have been approached (mainly by European companies) to look into acoustic sensors for stamping. Briefly stated, acoustic sensors act as microphones that monitor the sounds generated by a manufacturing process. These sensors are extremely sensitive to the vibrations emanating from machines and tooling. The technology has been used for years in machining operations. For example, as a part is being machined, vibrations generated by the forces being exerted on the part emit a series of primary and harmonic frequencies. A digital frequency analyzer monitors and analyzes these signals and can trigger an alarm to the operator in the event of an unusual situation. Unusual signals can originate from tool wear, lubrication issues, part-material variations, incorrect part-to-part setups and the like.

Sound like something that should work equally as well in a metalforming environment? Perhaps, except that many of our shops run antiquated presses with seemingly built-in random noise generators. Therefore, monitoring for subtle changes within the die—due to punch wear, for example—might prove challenging. Also, many dies run with few if any electronic sensors, and cumulative die crashes have led to a welded-and-ground patchwork of die sections. In some cases, after a few years of this type of repair the dies no longer operate as smoothly as they did in their prime. These dies, frankly, are noisy. In this old dog’s mind, this should be of concern when trying to detect subtle internal frequencies within the die, and then trying to correlate them to punch wear.

Having spent considerable time traveling and benchmarking against German metal-stamping operations, I have come to admire the consistency of their setups and the near-immaculate condition of their presses and tooling. They achieve this level of stability through the combination of internal apprenticeship programs and electronic sensing. Just recently I took a group of North American metalforming executives to visit stamping plants in Germany, where we were awed by their housekeeping, training and investments in modern press technologies. I assume that acoustical monitoring would make sense in this environment.

Outside of such an environment, perhaps acoustical-monitoring technology has evolved to where a metalformer could “teach” a monitoring device the normal noises of a used press. It then could filter out these noises to hone in on extraordinary noises and vibrations that might occur during operation.

Punch, rattle and roll is sometimes used humorously, in some quarters, to describe the noises within some stamping lines in North America. Squeaking, scraping and squealing noises from the press meet the banging of the strip as it smacks into the French stop, followed by the uneasy closure of the die as it fights the slight misfeeds common in many shops.

So, I seek proof that it is possible to isolate and perform frequency analysis within a challenging metal-stamping operation. I’m not talking about a finely tuned high-speed carbide die running within a well-maintained high-speed press, under the guidance of a highly skilled setter and operator. No, I want to witness an acoustic-monitoring demonstration within the average North American stamping environment.

I’m the old dog looking to learn new tricks. So, I invite those working in the acoustic-sensor technology sector to demonstrate their system operating under the above-described conditions. In return, I will devote a Metalforming Electronics column to the application. MF
Industry-Related Terms: Die, Lines, Run
View Glossary of Metalforming Terms 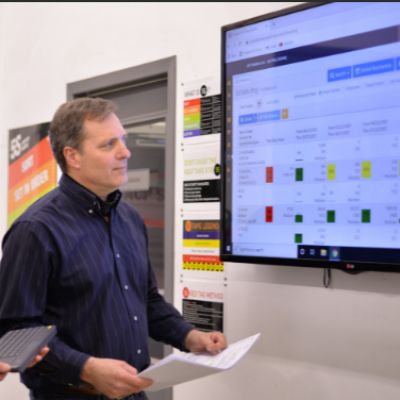