RoboVent, Sterling Heights, MI, has released a new fume gun that captures 90 to 95 percent of weld fumes at the source, in a package just slightly larger than a standard weld gun. The RoboVent Extractor integrates a high-performance gas-metal-arc-welding gun with a powerful source-extraction system to capture fumes as soon as they are generated. A lightweight, maneuverable handle and a streamlined nozzle provide maximum visibility and control. For welders working on or inside large equipment, such as tanks, ships or large infrastructure components, fume-gun extraction often is best way to keep fumes out of the breathing zone. Among the gun’s features: a conical suction head, welding tip and gas outlet for the shielding gas, to promote good visibility and reachability; a ball-and-socket joint between the torch and hoses, to improve maneuverability; and high capture efficiency, thanks to the suction module being located at the end of the welding gun and close to the source of fumes. 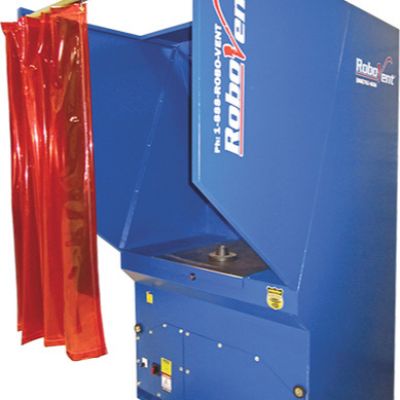