In 1990, the sheet metal-fabrication department of centrifugal-blower manufacturer Jan-Air welcomed its first CNC machine, a turret-punch press controlled from a DOS-based computer. My how far we’ve come, as early in 2019 the company, now operating out of a 52,000-sq.-ft. facility in Richmond, IL, became the proud new owner of a 4-kW fiber-laser cutting machine (a Bystronic ByStar 3015 with 5 by 10-ft. worktable), equipped with state-of-the-art end-of-line part sorting and stacking automation. 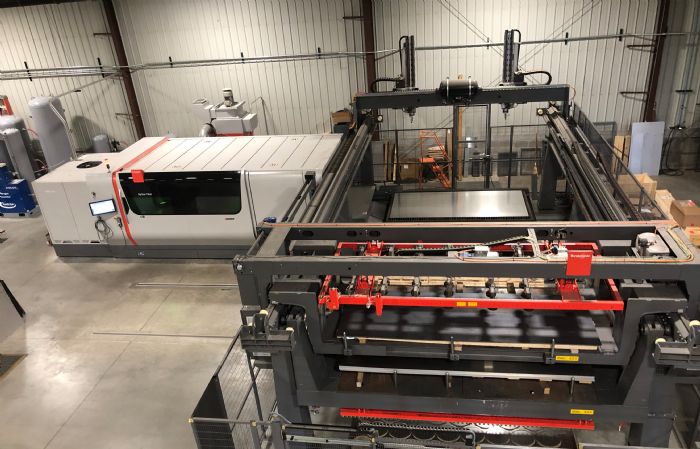 “During day shifts, we typically schedule our shorter production runs through the sheet metal department,” shares company president Mark Sattersten, “and overnight we’ll schedule longer production runs to process on the laser-cutting machine unattended. We can load up a 3000-lb. skid of material on the laser and leave for the night. It will run unattended, lights out, and in the morning when our shift starts there will be sorted and stacked parts, maybe as many as 1000 parts, ready for operators to move over to secondary operations—press brake bending, welding, painting or assembly.”

The Jan-Air shop processes mild and stainless-steel sheet, as well as aluminum, from 22 gauge to 10 gauge. “However, day-in and day-out we’re fabricating 16- and 14-gauge cold- and hot-rolled mild steel, three grades of stainless steel, and three different aluminum alloys,” Sattersten says, “perfect for the 4-kW laser. We’ve moved all of our aluminum work over from our CNC turret press to the new laser, which now cuts those jobs—including holes and oblongs—faster than we were punching them, and also eliminates the need to deburr after cutting.” 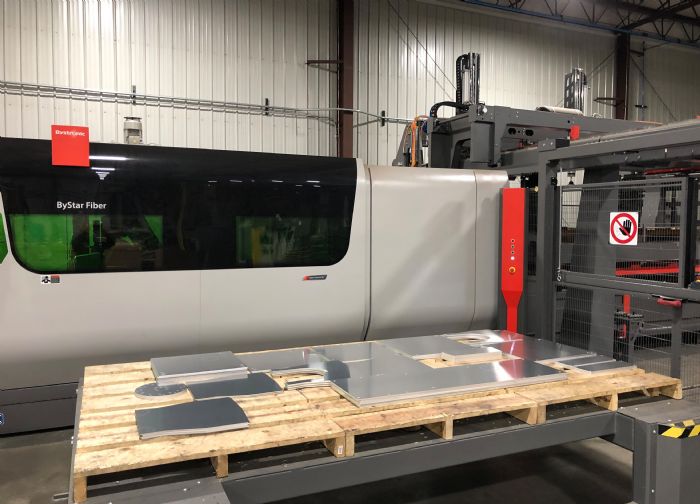 Jan-Air’s new Bystronic laser replaced a 2008-vintage 3-kW CO2 laser cutting machine and, according to Sattersten, it cuts about four times as fast while using 25-percent less electricity. It’s mostly the aluminum work that runs overnight lights-out—0.063-in. Grade 5052 H32 is a big runner, Sattersten says. Nests that run lights-out typically have previously run during the day to prove them out, “so we’re confident they’ll run without any issues, such as part tip-up in the nest,” Sattersten says. “We’ve been running the machine lights-out three to four nights per week, or an extra 30 to 40 hr. of weekly green-light time.

“The laser is so fast,” he continues, “that without the end-of-line automation, we’d be struggling to keep up with part sorting and stacking. So, rather than hire and train workers for relatively low-skill sorting and stacking tasks, we’re now hiring and training workers for higher-skill downstream work such as welding, assembly and painting. The automation has allowed us to increase volume and sales, and push everything through the fabrication department quickly and efficiently.”
Downstream operations include a pair Bystronic material-hungry press brakes—an Xcite80e 80-ton electric model added in 2013, and an Xpert40 portable high-speed model added to the plant floor in 2017.

Handling sheet loading and cut-part unloading at the new laser-cutting machine is a Bystronic ByTrans Cross, a modular automation system that also supports large-parts removal and selection of residual sheets. Operation of the automation occurs via operator touchscreen at the laser cutting machine control stand.

Included with the automation is the Bystronic BySort (the first such U.S. installation for Bystronic), an additional bridge installed on the ByTrans Cross that can accommodate two sorting heads equipped with gripper modules—pneumatic or magnetic. The automation, completely integrated with the nesting program to identify like parts on the nest, deposits and stacks cut parts on an additional unloading position next to the laser cutting system.

“The repetition accuracy during sorting and stacking is a huge advantage,” says Sattersten, “particularly when we’re cutting similar parts on the same nest―with the same peripheral dimensions but perhaps with a slightly different hole pattern. In these instances, operators may accidentally place the parts in the wrong stack. BySort, in sync with the Bystronic’s BySoft 7 programming and nesting software, eliminates any chance of this human error during part sorting and stacking.”

Jan-Air relies on the BySort system to group parts removed from the skeleton by job number and stack them for delivery to downstream operations. It also can program BySort to stack parts based on where and when they’re needed downstream. For example, if a nest contains 100 like parts but only 20 are needed for immediate assembly with the rest earmarked for storage, BySort will create two separate stacks.

“We also can use this capability to sort rush parts into separate stacks to expedite certain jobs,” Sattersten adds.
In addition, the BySort automation easily handles larger, heavier and perhaps flimsy cut parts with ease, difficult to achieve manually. And, according to Bystronic officials, “BySort increases the speed of the entire unloading process thanks to the efficient design of the system’s unloading routes. First, BySort unloads and sorts the cut parts. Subsequently, using a different route, the ByTrans unloads the residual sheet. This ensures that the laser cutting system’s shuttle table quickly becomes available for the loading of the next sheet.”

Many of the Jan-Air sheet nests contain a high part mix, say 10 of one part, 100 of another, five of another, etc. The company serves a diverse list of markets, including agriculture, HVAC, food processing and heat treating, “and when we prepare our daily production and parts lists, we’re modifying nests regularly,” Sattersten says. “The mix changes a lot; we’ll fabricate anywhere from one lot of parts to orders of 5000 parts. So, we’ll group jobs by material type and thickness and our laser programmers will dynamically nest them.”

The ByTrans Cross unit brings sheets to the laser utilizing two 6600-lb.-capacity pallets. Jan-Air stores material on cantilevered racks along a 100-ft. wall in the shop, in several combinations of material type and thickness. During the day when it tends to run relatively low-volume nests, it will use a fork truck to move an entire pallet of material into the ByTrans Cross, yet only need to process one or two sheets on the laser, “not an ideal setup,” Sattersten shares.

“We’ll be discussing with Bystronic in the coming months,” he adds, “an opportunity to add a material-storage tower at the front of the line, to conserve floor space and enable more efficient handling—and perhaps supply material to a second fiber-laser cutting machine should we decide to make that investment.” MF 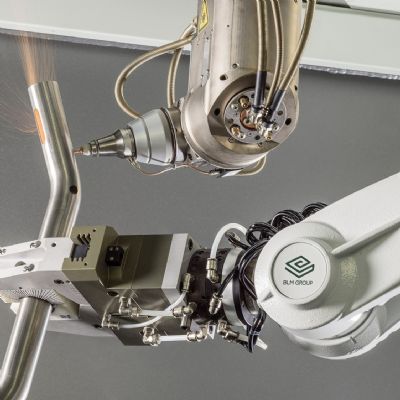 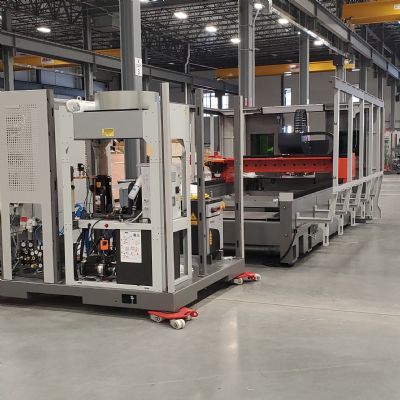 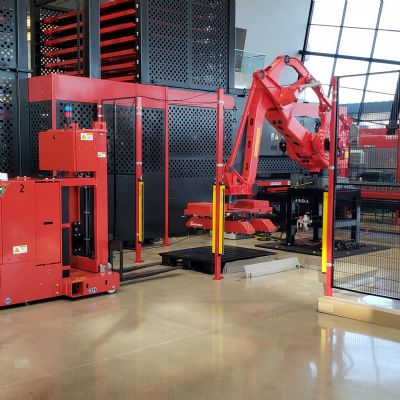